I finally gave in and bought one of the games that was lying at No.1 spot for a long time on my Steam wishlist – Wasteland 2 Director’s Cut. I am a huge fan of the classic Fallout 1 and 2, love post-apocalyptic scenarios and isometric role-playing games. Most of the followers of the genre already know that Wasteland 1 is what inspired classic Fallout.

I always had in my mind a very particular set of characters, which I believed would be really interesting in a game like this. I love Firefly. I felt like coyboys, sci-fi and wasteland would be a perfect fit for me to roleplay (as a party). I went ahead with that decision and I am seriously so in love with this game. 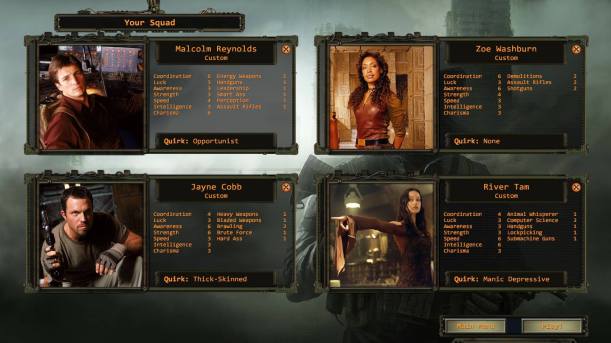 I’ll now share how the characters grew in around 30 hours of gameplay. Most of the characters in my party are Level 13 as of this post. I tried to roleplay and add only those skills which made sense to me (staying in line with their show counterparts and also helpful in the game/ but not always)

Without any thought, this guy had to be there. There was no question about it. A leader. Smart Ass. Charmer. Can make horrible/ bad choices ;]

Quirk: Opportunist [description from Wasteland 2] –> It takes a certain ethical flexibility to take advantage of others, and it’s a flexibility you possess. Your predatory nature means that you kick your enemies just a bit harder when they’re down. However, you’re also equally timid and fearful of harm coming to you, and as a result, you do less damage to those that are healthy.

I believed that quirk to fit Mal perfectly in this game ;] 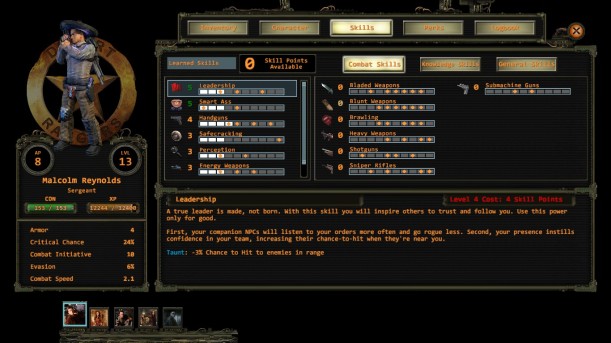 Skills: At this moment in the game, Mal is kind of above average in handgun combat. He also has Pulse Rifle as secondary weapon. Leadership helps during combat and Smart Ass provides interesting dialogue options in conversations (wherever possible). He is also perceptive and overall failure in safe-cracking.

Perks: bonuses for your characters as they level up.

Mal is pretty much having bonuses in Conversations and a little combat advantage. Overall, I use Mal for primary communication with others in game.

I really needed a character that can be strong in combat, hardcore and a true, good friend of Mal. It had to be Zoe. Bad-ass, strong and aware. 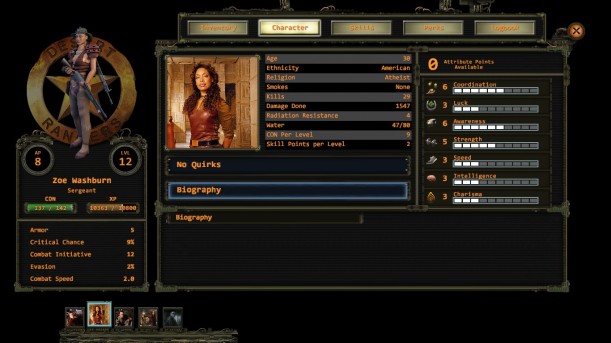 Quirk: Now, I went through the entire list present in game, couldn’t really feel like a particular quirk to fit Zoe. So, in this case, there is no quirk! No plus, no minus.

Skills: So, I really wanted Zoe to be a shotgun expert, bad-ass and strong. Her Field medic expertise (coming from Army) really helps out the other members. She also has average Rifle skills, really really useful when friends are in the way ;]

Perks: Without blinking, as soon as I got an opportunity to give her the first Perk, I chose Hardened. +1base armor. Perfect for this character.

At this moment in game, she is one of the best combat lady in my party and really messes up raiders and other critters in-game! Just amazing :]

Now, Jayne is a very interesting character. In the series and also in this game. I wanted a brawler, hard-ass and ranged expert at the same time. Jayne is all that and perfect Watchman!

Quirk: Thick-Skinned [description from Wasteland 2] –> All the boys ‘n girls in the playground used to pick on you. They called you stinky, fatty, ugly, and beat you up until you were bruised and sore. But the more you took it, the more you learned to shrug it off. Sticks and stones won’t break your bones. Years of physical abuse have left you thick-skinned and you can shrug off attacks more easily, but you’re heavier and more sluggish, and as a result, you move slower.

Isn’t it perfect for this guy? Such an easy choice for me – works especially well in the game too! 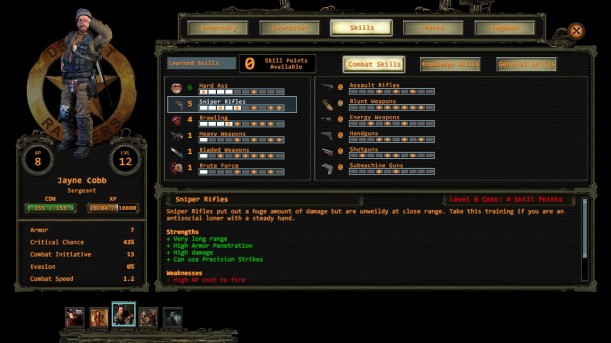 Skills: I did mentioned I wanted Jayne to be ranged expert but also a Hard Ass. Like how he really is. Brawling works wonderfully, when someone makes a mistake to jump on him ;] 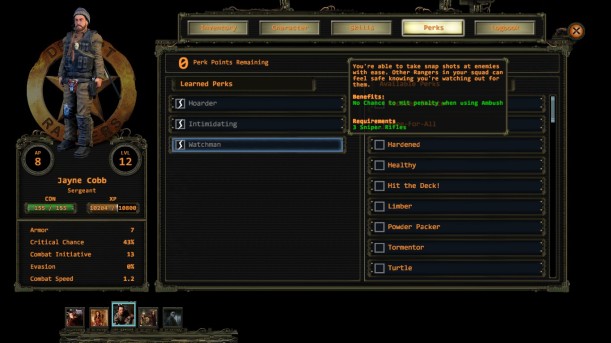 Perks: Now, being a strong-willed sniper, Watchman it was! Also, we have here intimidating and Hoarder – all Jayne bonuses ;]

Right now, after around 30 hours, Jayne is one of the best combat specialist in my party. Ranged destruction FTW! I have even seen him breaking down a Robot Crawler by brawling him!

Okay, so I’ll be frank, the aforementioned 3 selections (Mal, Zoe and Jayne) were easy choices for me. I mean, I had to have them in my party in Wasteland 2. For the final one, I took some time to decide on the best one.

I wanted the last member in my party to be one of these:

Going with either of those, can give rise to their respective benefits, personalities and skills. After thinking a lot, I almost went with Kaylee. I mean, wouldn’t she be perfect for Mechanical repair, toaster repair and also charismatic? Then it hit me, River is someone who must be tremendously more interesting to have here, because she is so different. And, that is why, even in the game (after finally choosing her) she is so different – useful and oftentimes useless – but oh so interesting!

Quirk: Manic Depressive [description from Wasteland 2] –> Mania and melancholy are two sides of the same coin, and you have known it all your life. You are subject to intense mood changes, and those around you say you’re almost like a different person each time they see you.

Perfect! Ain’t it? Also, so damn risky. This directly means, her attributes keep shifting every few mins (~15mins) – depending on whether she is feeling Mania or Melancholy! Trust me, because of this the gameplay and how we play around it has become tremendously more enjoyable for me.

Skills: Obviously, since I didn’t choose Kaylee, I still needed someone skilled enough to repair stuff, break into locks and use her intelligence to hack into computers and blast into enemies using Submachine guns!

Also, I loved using her Animal Whisperer skills to tame more than 20 animals including gila monsters, goats and worms! :]

Perks: For bonuses, I’ve selected her to have Weathered (resistance to crits) and Camel – which is really useful in this wasteland. Save, conserve and efficiently use precious water.

During gameplay, if possible I always try to use her whisperer abilities to tame animals (unless its impossible – level difference is high). It is really interesting to make choices based on her mood-state in the game. Many times, I had to wait for her to regain her abilities so that I could lock-pick an important safe!

Well, so that’s about it! I’m currently engrossed in Wasteland 2: Director’s Cut and find the role-playing pretty enjoyable. Especially, with a team like this… what can go wrong?

If you are reading this and love Firefly, RPGs or have been playing Wasteland 2, do post your thoughts.